There are four factors of production – land, capital, labour, and entrepreneurship. In the past one needed all four to run a viable enterprise; however, in an increasingly digital and networked world, you may only need a combination of two or more for a business to thrive. 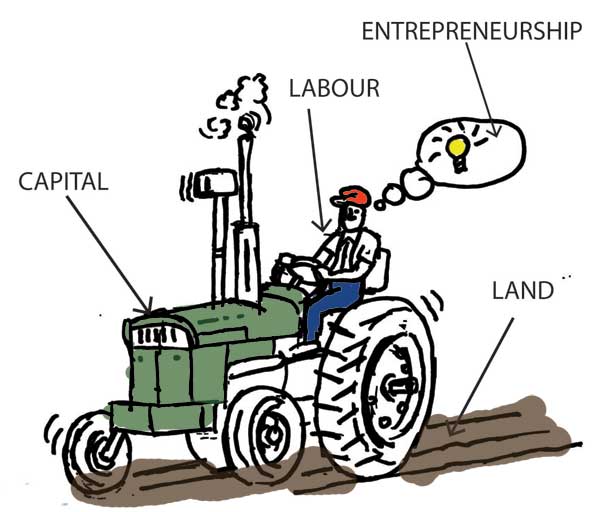 Factors of production – the lure into a false dichotomous economy for the working class in Uganda
Credit: romeconomics.com

This blog series delves into the dilemma of those in formal employment in Uganda and their natural tendency to run personal micro-businesses at the same time.  Ugandan speak: side-business among the elite, ‘kyeeyo’ or ‘oliina kewekoleede?’ in the local dialect.  I am sure that Kenyan’s, Tanzania’s, and Rwandan’s also have sobriquets for this practice

Working class Ugandan’s apparently run all kinds of micro-businesses at the same time as their formal job. Civil servants, induced by the inefficiency in civil service business value chains, always have more time at work than they need to accomplish their briefs. Civil servants at the same time are not always paid a living wage. The two factors combine to encourage a culture of personal micro-business start-ups by civil servants.

In effect, the civil servants have enough time to run both their personal enterprises and their official work; but, they also need the extra income to plug what at times is a significant disposable income deficit. Indeed, this so-called civil-servant fix, brings equilibrium to a unique demand and supply dynamic in the functioning of the civil service machine – i.e. ‘If I have time in abundance, but also an acute demand for extra income, why not invest my ‘time oversupply’ in addressing the income gap via personal business start-ups. Is it that simple?

It is not a simple demand and supply dynamic, driven by the oversupply of time and demand to plug disposable income deficits. It is slightly more complicated than that. Starting and running micro-businesses while in full-time employment is not only driven by having too much time at work and low disposable income, like the case is for civil servants in Uganda.

We, therefore, have to ask:

1. Why do workers in Uganda, both Civil Servants and other sector employees, opt to run personal micro-businesses while in full-time employment?
2. Where do they get the extra time and resources required to run micro-enterprises – i.e. providing the four factors of production in sufficient quantum – i.e. land, capital, labour, and entrepreneurship?

The answers to the first question: the lack of a social safety net. A typical working class Ugandan does not have a viable retirement plan. Many know that they don’t have enough to live on in their old age. Government and other company pension schemes, despite their evident goodwill, do not provide enough savings for retirement. Government service provision initiatives are yet to provide quality and sustainable services to its citizens. Ugandan hospitals are the best example of a botched service delivery paradigm. Therefore, every Ugandan in formal employment (white-collar) is working hard to earn more income, over and above what they are paid to work – this, to provide extra cover in old age

Globalisation and its effects have to be brought into the mix.  One of the consequences of globalisation has been to expose educated Ugandan’s to the global mercantile culture.  Moreover, a commercial culture that brings all kinds of temptation but without situating the country’s income/GDP reality. Ugandan middle-class cadres want to meet global wellness standards, despite the fact that they work in a minuscule and unviable economy.  To compensate for all the skews, those in formal employment in Uganda choose to live in a dichotomous economy – one of formal employment and another in which they employ others – a cacophony to say the least!

The answer to the second question is two-pronged. One: people running micro businesses fulfil the extra time and other resource needs (factors of production) via getting involved in corruption. The need to earn over and above current and low pay, as well putting enough resources aside for the rainy day, is fuelling corruption in this part of the world. People steal to acquire, especially land and capital to start personal micro enterprises. Two: Sadly, most of the micro-businesses run by Ugandan’s that are at the same time in formal employment aren’t viable; if viable at a point in time, many aren’t sustainable in the long-term.  The personal businesses are run in what we call the ‘bubble sub-economy‘ not informed by proper business principles – i.e. ‘as long as I can get my capital free (not from a bank), I can afford to run a failing business for years’; gratification, one may call it

Running successful personal micro-enterprise requires all four or a combination of at least two factors of production – this may involve a quantum of resource investment ($), brain power, or time. Many Ugandan micro businesses, run by those in formal employment, fall short of the above factor combination – it’s a false dichotomy